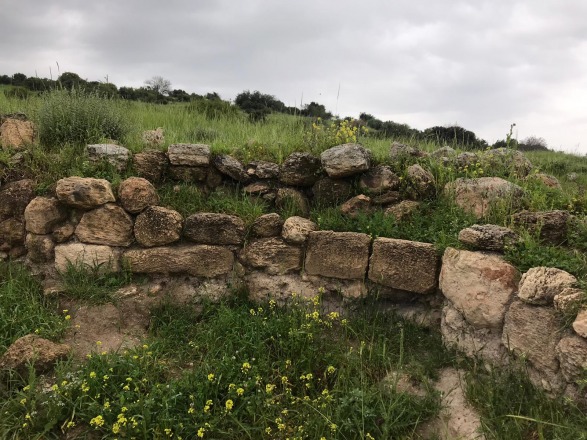 Members of the research team visit Mamluk site in the Judean Lowlands.

On 24 March 2019, Dr. Kate Raphael and Prof. Reuven Amitai learned about recent excavations at the Khurvat Midras (Arabic: Khirbat Durūsa) National Park, south of Beit Shemesh.  They were hosted there by Dr. Orit Peleg-Barkat of the Institute of Archeology at the Hebrew University, who has been leading this new round of excavations for several years.  While the main aim of Dr. Peleg-Barkat’s project has been to examine demographic and settlement change in the Hashmonean and Roman periods, the happy discovery of substantial and impressive Mamluk remains at the site have also received the attention that they deserve. These Mamluk-era constructions (dated on the basis of coins and ceramics) include remains of a large, well-built structure, as well as part of an impressive tower. All of these were constructed directly on Roman ruins, without any apparent layers from intermediary periods.  These late medieval remains are a mute, but a powerful testimony to settlement in this region during the period of Mamluk rule.