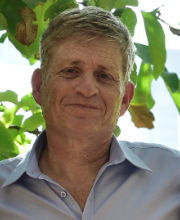 Reuven Amitai received his PhD from the Hebrew University in 1990, and is currently Eliyahu Elath Professor for Muslim History at at this institution.  His areas of research include the Mamluk Sultanate, the Mongols in the Middle East, processes of Islamization, and medieval Palestine. From 2010 to 2014, he was dean of the Faculty of Humanities at the Hebrew University, and from 2014 to 2016, he was a senior fellow at the Annemarie Schimmel Kolleg in Bonn. He is currently the chairperson of the Library Authority at the Hebrew University, overseeing the activities of all the libraries on the University’s four campuses.  His recent publications include Holy War and Rapprochement: Studies in the Relations between the Mamluk Sultanate and the Mongol Ilkhanate (1260-1335) (Brepols, 2013); co-edited with Michal Biran: Nomads as Agents of Cultural Change: The Mongols and Their Eurasian Predecessors (University of Hawaii Press, 2015); and co-edited with Christoph Cluse:  Slavery and the Slave Trade in the Eastern Mediterranean, 11th to 15th Centuries, published in 2017 at Brepols.  In 2018, he received the degree of doctor honoris causa from the National University of Mongolia.